You have no items in your cart

Rep our Brand with a cool Mug!

Mug with Color Inside
$15.00
Show options

I had been wanting to try Shaun's stuff for some time so I finally pulled the trigger. I am normally not a sweet scent profile kind of guy but I figured I would give this a go seeing how I love cherry and green apple, and of course it has my favorite video game characters on the bottle. When it arrived I loved the scent profile, and wore it the next day. Let me say, I have not had a beard oil yet that took to my beard as well as this has. Instantly beard was soft and the scent is amazing, my beard is coarse and thick and I needed a product that would do the job and this certainly has done that! Great stuff Shaun, can't wait to try some more of your products.....oh....GO BLUE!

Is there a way to edit this and take Go Blue out?!?!? oh sorry writing out loud....haha....Thanks for the kind words!

I’ve got 4 different scents from 8 bit and the cherry green apple makes my wife say “yum” from other parts of the house! LOL

M
Mykel D.
Why is Smash Bros Being Retired!?!

I already loved Second Banana for the its in beard feel and scent and thought I would give Smash Bros a try because I do have a thing for cherry scents. Well let me tell you, this is now one of my top 3 beard oil scents! I like this one better than Second Banana, and did I mention I loved Second Banana, lol!?! Well I just ordered a stock me up order so I can keep this scent around for a while since its being retired. Might I suggest everyone making a run on this scent and Second Banana so they will be brought back out of retirement at least for limited runs, especially while they are on sale for the amazing price that they are for another week and a half! Buy Smash Bros if you like cherry scents with a twist! This is sooo good!

J
John McFarland
Best smell you guys have. Hands down

Love all their product but the apple one is good enough that it wakes my wife up when I’m getting ready for work and every time she tells me to hurry home! LOL.

J
Jacob
Down the tunnel we go

This is probably my favorite scent to wear when it is nice outside. LOVE the smell of cherries and the green apple and it really isn't over powering,it's sweet but not to sweet and lasts for many hours.

Let customers speak for us

I will never be rich enough to know whether this smells like the original, but I love how it smells. Nice and citrusy, with just a hint of vanilla. My wife loves it too!

I truly don't like barbershop scents I have tried many from different companies, wanted to add this to the collection but soon as I opened it and smelled it, it's truly the best scent I have ever smelled based on barbershop, it's not heavy and it's not overly powerful when you put it on and slowly mellows out. Don't know how Shaun did it but he hit the nail hard on this one and I love it

Shaun this one is so amazing this scent is like no other my wife loves this one so fresh and clean, definitely a spring & summer scent this is a must try guys , got the candle as well love it 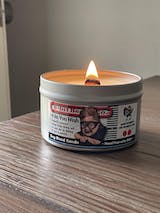 Shaun truly poured his heart into this and Its one of the best scents he has released. From the detail to the label, the packaging, the scent is beautiful and fits a spring/summer scent and love wearing it on date nights. Wish I ordered a second bottle just to collect. Can't wait to see what's next

This was my 1st time using 8 bit beard oil so I don't know how the previous formulation was. But the feel in beard is amazing. The smell of this is turning into one of my favorite scented beard oils. Gonna have 2 get another bottle soon since this is limited.